What happens when an Omnivore goes Fruitarian for a week?

My husband, Jacob, is no stranger to challenges. Just to give you an idea of the type of guy he is, when he realized he hated running more than anything in the world he decided it would be a good idea to sign up for the LA marathon. After months of a treacherous training regimen he completed that first marathon (with amazing timing) and decided almost immediately to run another one. So, 2 marathons and 2 half-marathons under his belt in a matter of 2 years and he was off to his next challenge. Applying to get his MBA while working full-time as the COO of a successful “something to do with sound and audio” manufacturing company and boom he got accepted and officially enrolled in the UCLA Anderson School of Business – Executive MBA Program (Top 2 school in the nation. sorry but I actually do HAVE to brag)

He’s always been really physically fit and works out several times a week, every week (eye roll) After living a 100% vegan lifestyle for many years in his 20’s, he went rogue AKA Omnivore, for the last few years and has been eating everything his hungry heart desires, while still continuing to keep a very healthy diet of lots of fruits & vegetables including many vegan meals (thanks to his food bloggin’ wifey). All of a sudden he decided, basically overnight, he was going to try a Fruitarian diet for 7 days. Luckily, I got to document the whole thing.

So what is Fruitarianism and the 80/10/10 diet and why do most people including the most hardcore vegans consider it the most extreme of the plant-based diets?

Fruitarianism (/fruːˈtɛəriənɪzəm/) is a diet that consists entirely or primarily of fruits in the botanical sense, and possibly nuts and seeds, without animal products. Fruitarianism is a subset of dietary veganism. (wikipedia)

And here is a cool picture if you’re more visual like me: 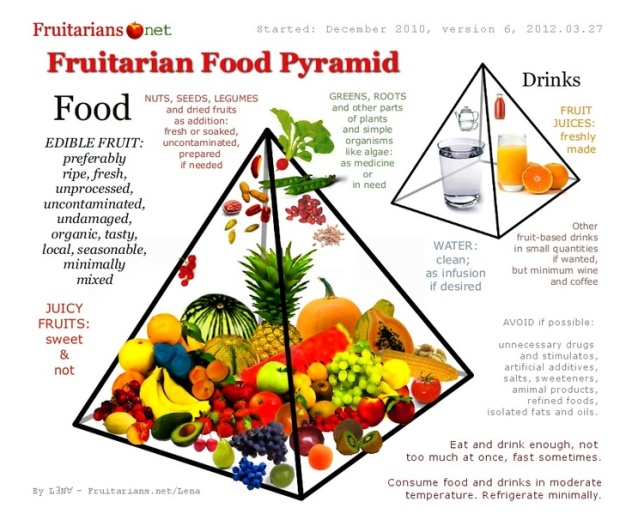 As you can see, a fruitarian basically lives on nothing but raw, fresh, whole fruits. Some eat a very minimal amount of greens, nuts, and seeds but basically 80% of their diet comes from ONLY FRUITS.

Ok pause, I know what you’re thinking so let’s just get that out of the way now…

But what about all that sugar? Isn’t sugar bad for you? No, it’s not bad for you when it comes from whole, natural fruits. (reason here)

But where does he get is protein? Don’t you need protein to live? No, you don’t actually need THAT much protein to live AND he was actually maintaining about 60 grams of protein a day because shocker, FRUITS have protein! (reason here) (more protien facts here, here, and here)

So wait a minute, NO PIZZA like EVER?! Okay maybe that’s just what I was thinking but hello, PIZZA!!!

The articles linked above are great resources for those of you who want to deep dive into this a bit further, but let’s get back to HIS story and what HE experienced. This is in no way promoting or discrediting the Fruitarian lifestyle. This is only the truthful accounts of 1 hungry omni man and his fruity banana-filled week.

So what about this intrigued my husband and how did he go about it?

I think it all started when he found Sweet Natural Living’s youtube channel and started watching- kind of in disgust– about his lifestyle and the way he eats. The more and more he watched and thought what we would all think, “OMG, I could never eat like that” the more and more he felt he needed to really see if he could. You have to admit there is something very intriguing about watching a grown man eat 14 mangoes in a row chase it down with 2 whole fresh coconuts, burp 6 times, and then describe how amazingly refreshing, delicious, and satisfying it was. I mean, I’m craving mangoes just thinking about it. The more research he did and the more he learned, the more intriguing it became. He too had those questions above as anyone might have and his research proved that this IS actually a very optimal, healthy way to live. So I guess that, his innate desire for challenge, and his love of fresh fruits & vegetables was all he needed to really kick-start his 1 week of Fruitarianism.

And so it began… 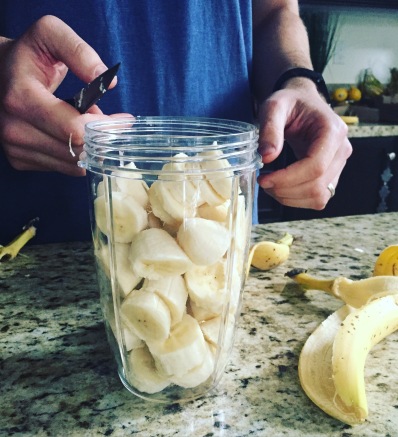 He started on a Sunday morning and I just have to be completely honest here, he ate an entire Large pepperoni & pineapple pizza for dinner Saturday night. It’s important to realize that beside his research on the topic there was absolutely no real preparation. We hadn’t even gone grocery shopping yet. So we hopped in the car on Sunday morning and headed for the grocery store. Through his research beforehand he knew that he needed to get the best tasting, mostly organic, & ripest fruits he could find. Optimally we would’ve gone to a farmers market but again we didn’t really think it through so we went to an Asian Grocery Store and a Persian Market (Lol, I know sounds strange but that’s what we did)

Initially he felt really great on day 1. Full of energy but not in a jittery sugar-high kind of way. Full and satisfied without feeling overly full or sick. The sweetness of the fruits were the only real surprise and everything seemed even sweeter than he imagined. 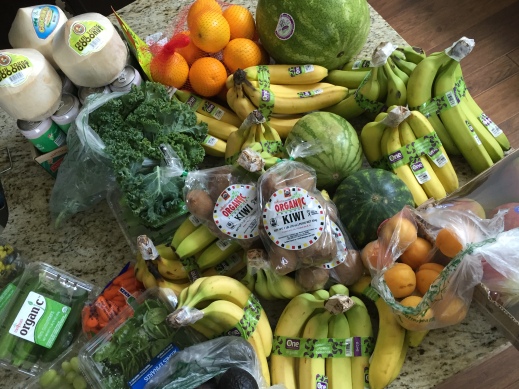 He went to work on this day and found his Mangoes to be hard as a rock and also learned that baby bananas are about 20 million times sweeter than a regular banana, FACT. (not really a true fact) He reported that on day 2 the raw tomato he had with his dinner was the most amazing thing in the world because he just missed that savory feeling.

Raw. Tomato. You guys. No salt, no pepper, no pasta, just. a. tomato. The gratitude was kicking in… 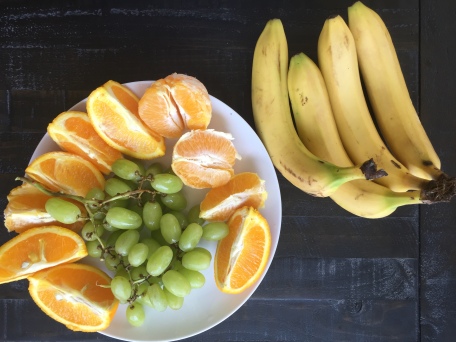 Shit got really real on Day 3. The watermelon was rotten. The mangos were still rock hard. The thought of another banana was just too much to bare. Oh the struggle. Kiwis to the rescue and he made it through the work day. We decided we needed to make another shopping trip and pick up a few more fruits. Real, fresh, delicious fruits. If there is one thing he learned right away it was the major importance of eating fruits that actually taste GREAT. Not just good, but amazingly, deliciously, mouth-wateringly great! Unfortunately the shopping trip wasn’t a great success except for a giant watermelon and some peaches because all he really wanted was grapes which were unavailable. He had a huge migraine throughout the night and could barely sleep. Not to mention the stomach ache that was taking over. We believe these were all symptoms of detox, obviously, but it was still really tough. These feelings brought him to a breaking point but he decided to go ahead and take some advil and drink a coconut water which helped him finally get some rest. In his mind he was done and Day 4 was gonna be back to “normal” food. 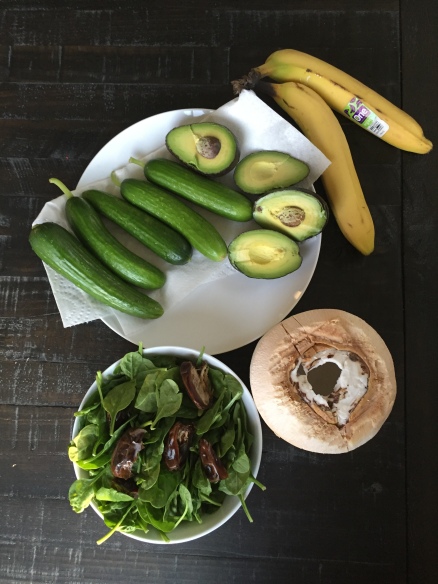 Waking up in the morning after the night from hell, and he decided to push through one more day… (Proud of you, Joony!) Still carrying that terrible stomach ache he grabbed his watermelon, a few peaches, some coconut water, and a couple cucumbers- made himself a green juice with 4 of those dreaded bananas + 1 cup of blueberries- and off to work they all went.

This was the home stretch and although he was kinda over it, he could see the light and was willing to go all the way. He continued with his bountiful fruit loaded meals and got through the day. In the evening he walked over to the health food grocery store and picked up a raw vegan Sunseed Chorizo wrap. He could not stop gushing over how amazing this was. It was a little piece of heaven for him. He devoured it almost as quickly as that large pepperoni & pineapple pizza the week before and I think he enjoyed it twice as much. 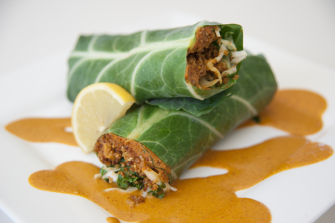 Friday was my personal favorite day because hubby came home and said that all he wanted was a yummy vegan meal and he would just kill for some Veggie Grill! HOORAY! (Back story, I absolutely LOVE Veggie Grill and could eat it for every meal, every day. Him, not so much… so basically hearing these words come out of his mouth was a dream come true for me) Nonetheless, we didn’t go. Instead he ate fruit, spinach, avocado, cucumbers, and some more fruit. 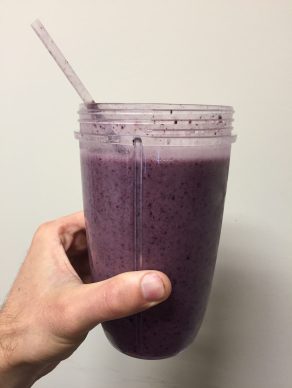 HE MADE IT!! We went to this great Vegan restaurant to celebrate and he ordered a super healthy bowl (brown rice, collard greens, broccoli, jack fruit, onions, & BBQ sauce.) His first cooked meal in a week. He only finished about 1/2 of it before he started to feel too full to even function. (Don’t worry, I finished it for him) He immediately started to feel heavy, sleepy, & bloated.

I guess I should have noted before that he worked out 5x this week. A mixture of intense CrossFit & his gym routine which includes long distance running and weightlifting. He started the day by going to the gym for his workout and using the InBody (Body Fat Composition Analyzer)machine to weigh himself and compare to his first weigh in 7 days ago.

When all was said and done he did lose about 8 pounds that week but after a very detailed body scan he found that most of the weight that was lost consisted of water and muscle. In addition to the loss of muscle the desire for cooked & savory food was real and he struggled with that almost every day.

Where is he now:

The combination of the muscle loss and cravings struggle proved again this lifestyle wasn’t for him. He left the week behind with a newfound appreciation for the vegan diet and eating whole plant-based foods in general. To sum it up, this Veggie Loving guy is not going to be living in a jungle without shampoo or deodorant any time soon.